Primary Documents from the National Archives 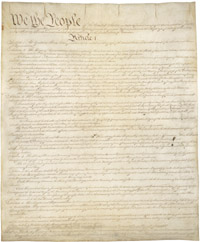 Image from The National Archives

Constitution Day commemorates the formation and signing of the U.S. Constitution by thirty-nine brave men on September 17, 1787, and recognizes all who are born in the U.S. or who by naturalization have become citizens.